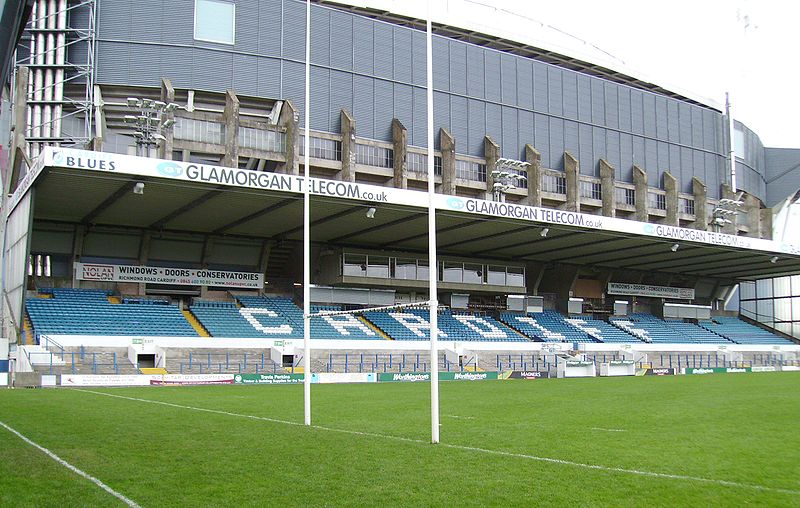 The South Stand, with the Millenium Stadium towering behind.

The Cardiff Blues are one of four sides set up by the Welsh Rugby Union to compete in professional rugby competitions in Europe. The side currently compete in the RaboDirect Pro12, Anglo-Welsh Cup and Heineken Cup, and despite their name represent not only the capital city of Wales but a large region of central and southern Wales as well, including the Vale of Glamorgan and Breconshire.

They maintain affiliations with a number of clubs in the region including Cardiff RFC and Pontypridd RFC. The Blues groundshare with the former at Cardiff Arms Park, returning to their original home following several seasons at the Cardiff City Stadium, home of the city's soccer side.

The Arms Park is one of the most famous old grounds in Welsh rugby, situated right in the heart of Cardiff. The name is derived from the hotel which originally stood on the site in the 17th Century. Cricket was the first sport to be played on the grounds, before Cardiff RFC and the Welsh national team made it their home in the late 1800s. The first international fixture at the ground was in 1884, when Ireland were defeated in front of 5,000 spectators.

Throughout the 20th Century a mixture of stands were created, demolished and redeveloped to accommodate the ever-increasing crowds, with floodlights introduced in 1966. In the 1970s, a new national stadium was built on the site of the original Arms Park, and a new ground (the current holder of the Cardiff Arms Park name) was built just to the South. However, the new national ground soon wasn't big enough to cope with the demand for Welsh rugby, and it was demolished and re-built as the Millenium Stadium in 1999, which now towers over the South Stand. 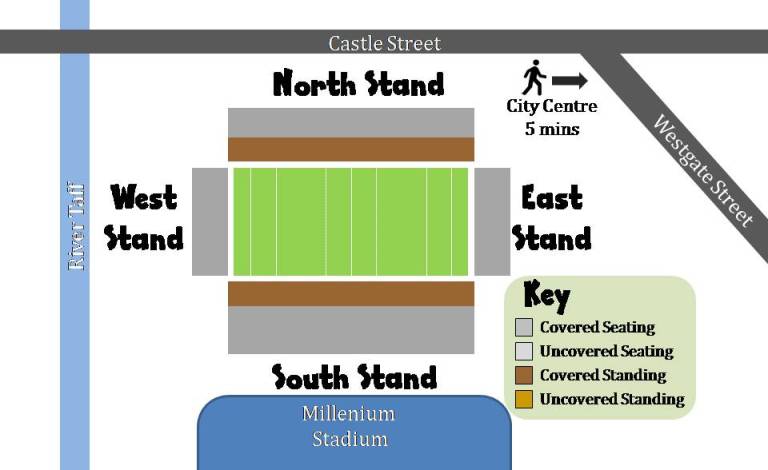 Today the Arms Park is a great traditional rugby union stadium, and wherever you choose you'll get a good view of the match. The South Stand is tucked neatly onto the sideline featuring a standing terrace to the front and seating to the rear, and backs right onto to the Millenium Stadium. The North Stand opposite is similar, but with a smaller seating capacity. Behind the posts to the East is a two tiered stand, with small blocks of family seating in the lower tier and executive boxes in the top. At the other end, the West stand is home to more hospitality boxes but offers no space for the general supporter.

For the 2013-14 season, an artificial pitch was installed at the Arms Park at a cost of just under half a million pounds. This is the second artificial pitch in place at a top flight European club, following on from Saracens' Allianz Park. 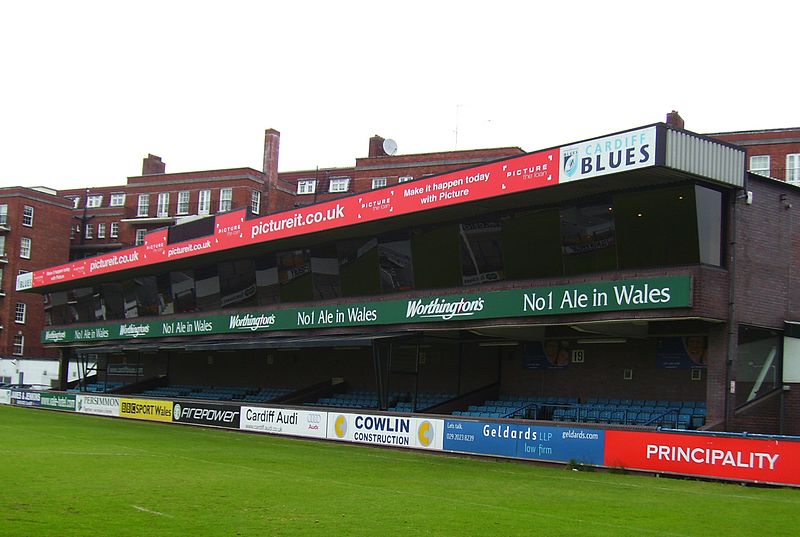 As the stadium is right in the middle of Cardiff City, it's not difficult to find - simply follow the signs from the M4 motorway for the Millenium Stadium - the Arms Park is next door. However, there is no parking available at the ground so you will need to find alternatives in the city centre - there is an NCP car park opposite the stadium for starters.

The other station is Queen Street, which serves destinations within Wales, including those to the Vale of Glamorgan and the South Wales Valleys.

A shuttle bus operates from the terminal to the airport train station, where an hourly service (two-hourly on Sundays) takes you to Cardiff Central station in thirty minutes. Alternatively, the X91 bus takes 35 minutes between the airport and City Centre, with services every two hours.

Alternatively, Bristol Airport is a just over the English border and offers a wider choice of connections, including year-round flights to Knock, Newcastle, Nice, Rome (Fuimicino) and Toulouse. 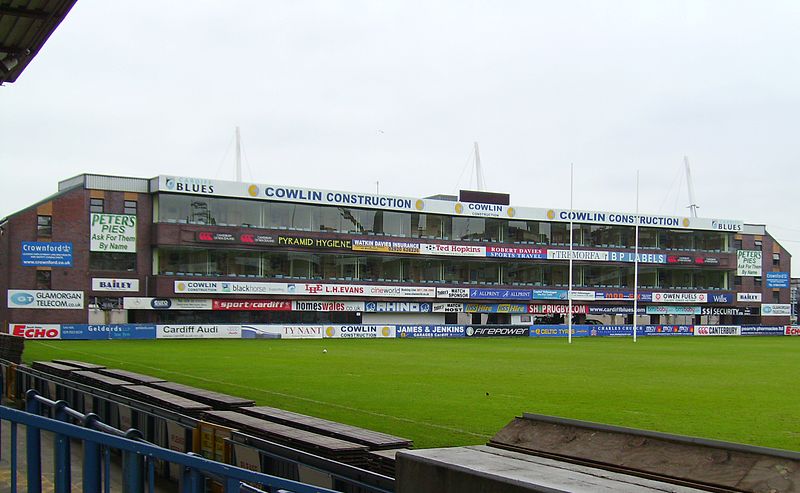 There is a large public bar in the South Stand that opens around 90 minutes before kick-off and often has live music to boot. There are two further bars inside the South Stand and two in the North stand.

The clubhouse at the Arms Park is located in the corner between the South and East stands, but is members-only.

You are spoiled for choice with options for drinks before and after a game in Cardiff, with the majority of bars, pubs and clubs within walking distance and the city renowned for hosting a good night out.

Where are the best places for a pre or post-match pint in Cardiff? Let us know here.

Food outlets are available in both the North and South stands. 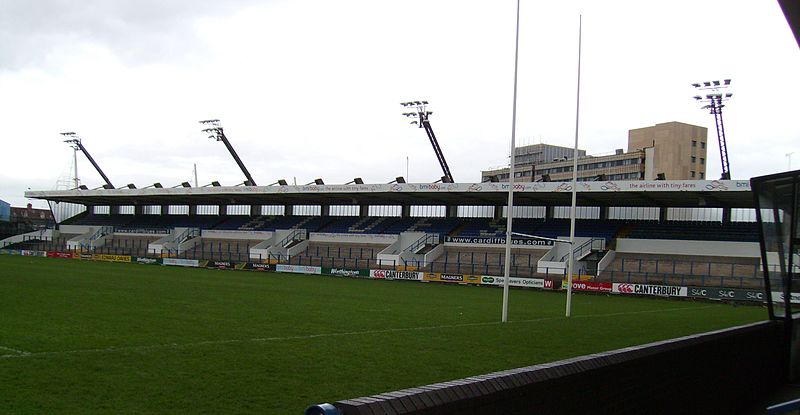 As a capital city, Cardiff has a pretty extensive range of accommodation on offer for visitors. You can stay anywhere in the City Centre and be within walking distance of the stadium, pubs, clubs, restaurants and attractions. There are branches of the Best Western, Radisson, Marriott, Park Inn, Hilton, Ibis, Novotel, Thistle, Mercure, Premier Inn and Travelodge chains in the City Centre, amongst other independent hotels and guest houses.

If you are staying for more than a night, another option to check out is the redeveloped Cardiff Bay area, home to plenty of restaurants and bars and easily accessible from the City Centre. In this neck of the woods try the Express by Holiday Inn, Future Inn, or if you are looking for a bit of luxury the St Davids Hotel & Spa.


Off the Beaten Path 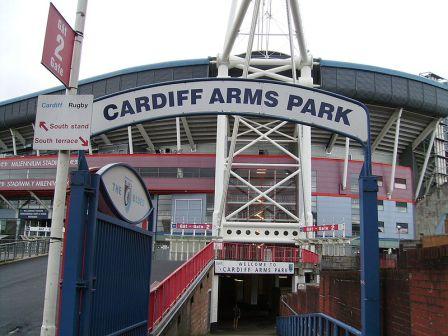