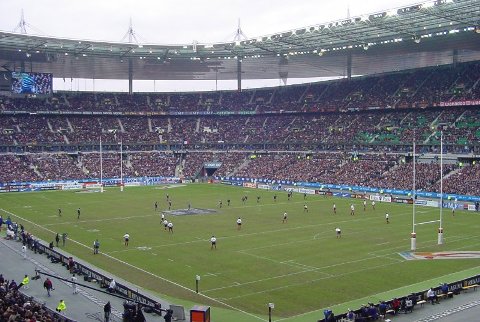 France have been competing in international rugby union fixtures since 1906, joining the then Five Nations annual tournament in 1910. It wasn't however until 1959 that France first won a Five Nations title, with a draw against England and home victories over Scotland and Wales getting them over the line. In total the French have won the Five/Six Nations title on 17 occasions, with 9 Grand Slams. 'Les Bleus' have also competed in every Rugby World Cup so far, reaching the final three times in 1987 (vs New Zealand), 1999 (Australia) and and 2011 (New Zealand) without yet winning the tournament.

The Stade de France has been the national stadium for the majority of both French rugby union and football fixtures since opening in 1998, and also hosts the domestic cup finals in both sports. Local club sides Racing Metro and Stade Francais have moved high-profile fixtures to this venue, whilst the opening fixture and final of the Rugby World Cup 2007 were also played at the ground.

The 81,000 seater stadium is situated in the rather unglamorous Northern Parisian suburb of Saint-Denis but within easy access of the City. The Stade de France is also able to host athletics events, but thankfully the stands can slide in and out meaning for rugby fixtures there is no running track separating fans from the action 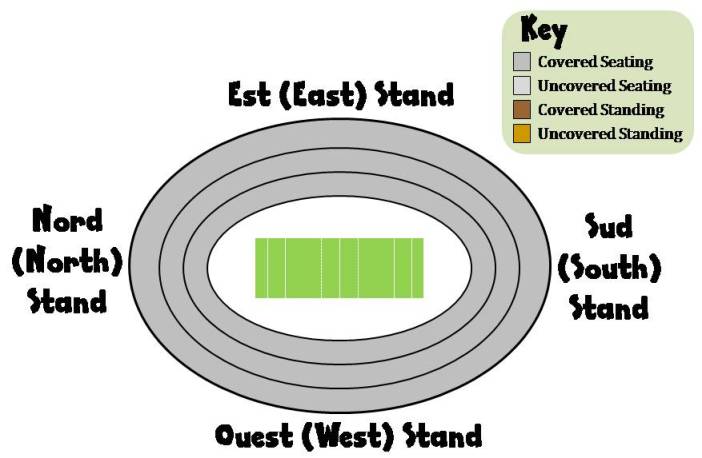 There are three tiers of seating on every side, with the priciest seats usually in the lower and middle tiers on the halfway line (East & West Stands) and the cheapest in the upper and lower tiers behind the posts (North and South). Whilst every seat is technically covered from the elements, if you are seated in the front tier and the wind is against you there is more than a slight chance of getting wet. Two large screens are located at either end of the pitch, though remarkably for such a modern stadium the pitch lacks under-soil heating which led to controversy in 2012 when a Six Nations match between Ireland and France was postponed at the last moment with the stadium full of supporters.

The atmosphere at matches is variable to say the least, as the French fans have a tendency to boo their own side when things aren't going their way, or resort to mexican waves if the match isn't particularly inspiring. Despite such flakiness, if France are appeasing the masses then the chants of 'Allez les Bleus' around the ground can be immense. 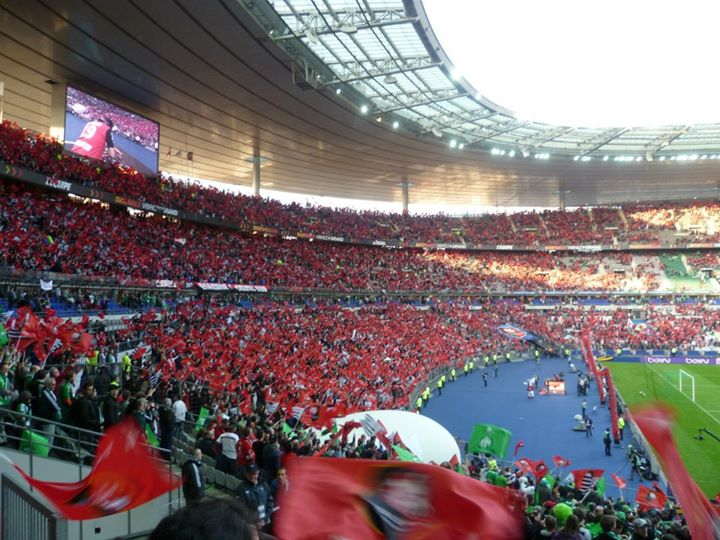 The Stade de France was designed and built with public transport in mind, so if you can avoid driving it is advisable to do so as parking is limited in the vicinity of the stadium and there isn't usually official parking available for rugby fixtures. In any case, it takes a certain combination of bravery and stupidity to take on Parisian drivers at their own game!

By Train (to Paris)

Paris is a focal point of the high-speed rail network in France and Western Europe. The majority of international services arrive at the Gare du Nord, including those from London, Brussels, Holland and Germany. Direct trains then operate from the Gare du Nord to the Stade de France.

From within France, the majority of high-speed services operate to the Gare Montparnasse, whilst slower services arrive at either the Gare d'Auterlitz (from central/SW France) or the Gare de Lyon (from South/Eastern France). Use the Metro / RER services listed below to get to the stadium.

By Train / Metro (to the Ground)

The Stade de France is well-served by rail. The suburban rail network in Paris (known as the RER) has two lines serving the 'Stade de France - Saint Denis' station - RER B and RER D, and is the quickest way to get to the ground. Both lines depart from the Gare du Nord (5 minutes journey time), Châtelet-Les Halles (10 minutes) and Gare de Lyon (15 minutes) in the City Centre, and run regularly before and after matches.

The Saint-Denis branch of Line 13 on the Paris Metro also serves the 'Saint-Denis-Porte de Paris' station close to the stadium and runs to Gare Saint-Lazare (15 minutes), Invalides (20 minutes) and Gare Montparnasse (25 minutes) amongst others.

You can view a useful map of both the RER and Metro network here.

One of the main downsides to the Stade de France is that when the stadium is busy, you may have to queue for up to an hour to get into the stations outside the stadium to get back to Paris. Your best bet is to either leg it when the match ends and beat the crowd, or try not to plan anything too soon afterwards. There are plenty of vendors around so you can enjoy a beer outside and digest the game with fellow supporters whilst the crowds die down.

Paris is served by three airports;

Situated in the northern suburbs, Charles de Gaulle is the closest airport to the Stade de France and also the largest airport in Paris. Flights operate to a wide range of rugby-friendly destinations including Belfast (City and International), Birmingham, Cardiff, Cork, Dublin, Edinburgh, London (Heathrow, Luton and Stansted), Manchester and Toulouse. Major airlines based here include Air France, Easyjet, Aer Lingus and Flybe. A word of warning however - the airport is subdivided into loads of terminals, so make sure you know in advance which part you need!

The airport is served by direct trains (RER B) to the Stade de France and the city centre. If you are willing to risk the traffic on the roads, there is also a direct bus service operated by Roissybus from the airport to Paris.

Orly Airport is situated in the southern suburbs, where the RER train line B provides connections to central Paris and onwards to the Stade de France. Scheduled flights operate to destinations across France in addition to London (City and Heathrow), Milan (Linate), Naples, Pisa, Rome (Fiumicino), Southampton and Venice (Marco Polo).

Beauvais is the Parisian choice for low cost carrier Ryanair, and as expected it is also the furthest away from the city (around 80km!). Destinations include Dublin, Edinburgh, Glasgow (Prestwick), Venice (Treviso), Rome (Ciampino) and Marseille.

To get into Paris, take the shuttle bus to Porte Maillot station (journey time around 1h 15 minutes) where the Paris Metro or RER will take you the rest of the way into town. Alternatively you can take a taxi around 15 minutes to the train station in Beauvais town centre, where services operate to the Gare du Nord, taking around an hour. 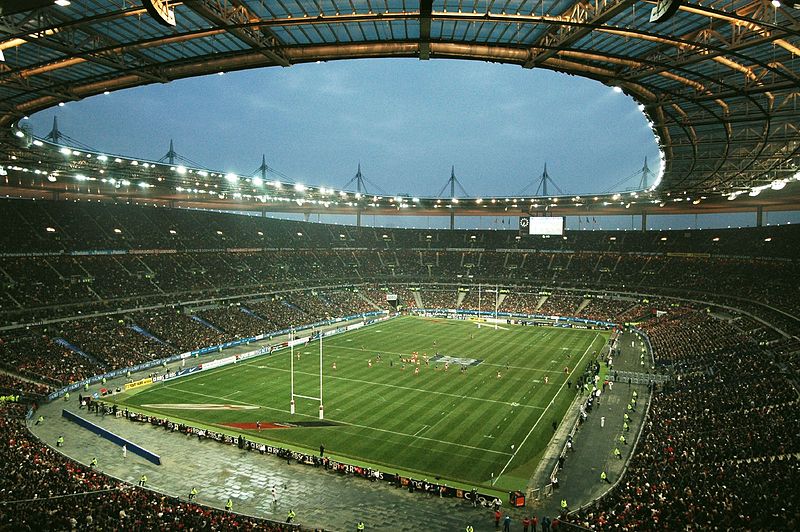 As Saint-Denis isn't the most glamorous part of Paris, the majority of fans spend the build-up to the game in other parts of the City before catching the train out. This and the sheer size of Paris mean that there sadly isn't much of a buzz around the place on a matchday compared to other Six Nations host cities.

Popular spots centre around the Gare du Nord and Châtelet areas in close proximity to rail connections to the ground. Below are a few recommendations for where to drink, though expect to have to shop around for happy hours if you are price sensitive, as drinks don't tend to come cheap in this city. 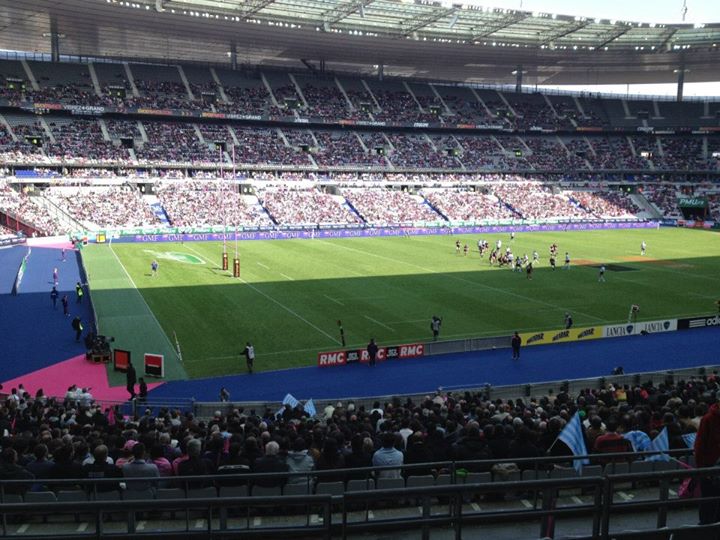 View from the West Stand

As with drinking, your best bet is to eat in the City Centre before and after the game rather than in Saint-Denis. Paris is full of bars, restaurants and street vendors and food is relatively cheap in comparison to alcohol. The area around Châtelet-les-Halles station has plenty of options, and offers a quick trip to the ground. 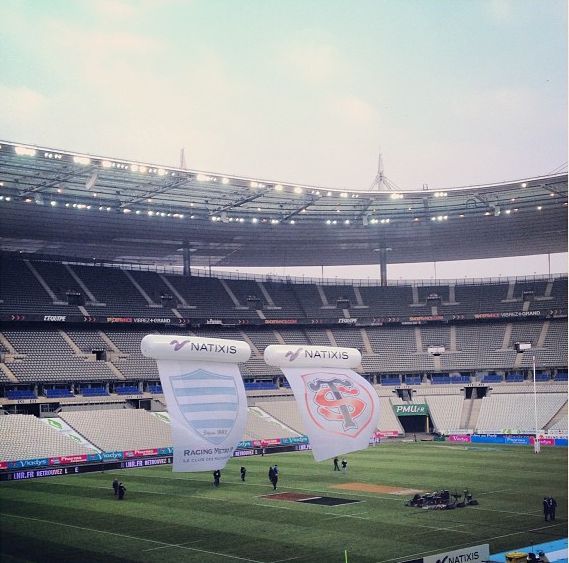 The City Centre of Paris provides every kind of accommodation you could imagine from dorm rooms in hostels to luxury hotels. If you need to stay near to the stadium here are several options;

The only real positives of staying at the stadium is that you can avoid the scrum to get back into town after the game, you aren't too far out of the city and are within easy reach of the airport.

There isn't enough room here to detail all the sights and attractions that make Paris one of the most visited cities in the world. Try Wikitravel for details and recommendations on what to see and do during your stay.