From the 2012-13 season, Glasgow Warriors have been playing home fixtures at Scotstoun Stadium in the West of the city. Warriors fans seem to be relatively happy with their new home, and the opportunity to set up proper roots at the ground following a rather nomadic existence in their early years. As with rivals Edinburgh, Glasgow were set up to compete in the professional Celtic League (now Pro12) and European Cup.

The team has been going from strength to strength in recent years, culminating in a first ever Pro 12 championship title and progression in Europe. More and more fans are being drawn towards Scotstoun on matchdays, with a great rowdy atmosphere forming.

Scotstoun is a modern stadium which doubles as Glasgow's athletics venue and therefore has a running track around the pitch. It is also the current host venue for the Scottish leg of the IRB World Sevens series. Scotstoun is owned and operated by Glasgow Life, an "arms-length" branch of the City Council. Glasgow Warriors trained at Scotstoun for a few years before agreeing to play home games there from 2012. Situated in the West End of Glasgow (if there is such thing as a rugby heartland of this football-mad city it is here), the ground is close to the Northern end of the Clyde Tunnel. 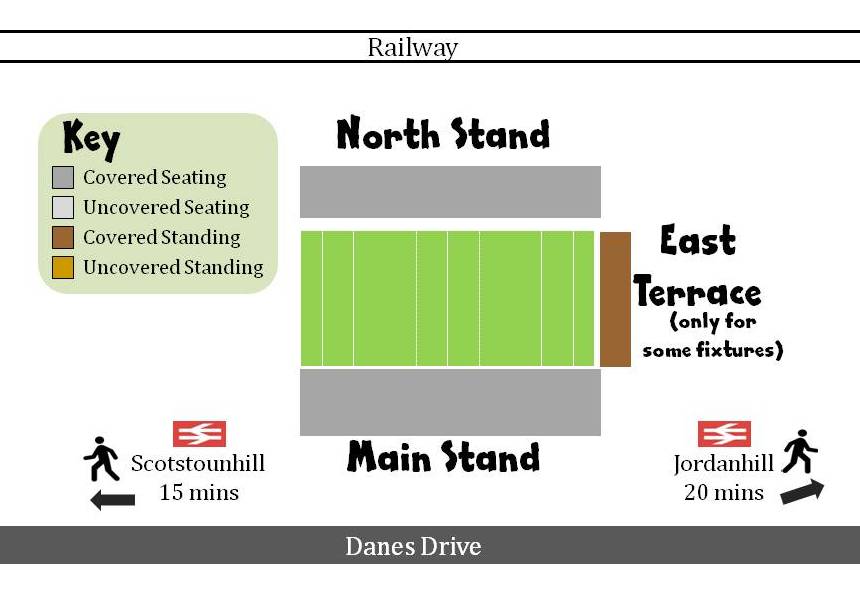 There are two permanent stands at Scotstoun. The Main Stand sits on the Southern side of the ground, and despite the running track there are good views of the pitch. One tip is to try and sit on the Eastern side of the stand if you can, as the Western end can be a bit chilly due to the prevailing winds. The North stand on the other side of the pitch is a smaller structure, but it is handier for outside bars and the clubhouse. For some matches a temporary covered standing area has been put in place known as the East Terrace, but it's best to check your match details specifically if this exists. As one visitor commented, if it's not there you can get soaked to the skin!

The club make a real effort to create a family atmosphere on matchdays, with bouncy castles and other entertainment for youngsters laid on, and a clubhouse to keep the adults amused. This is normally a hall for the adjacent leisure centre which is converted into a bar for Warriors games. It is a tad echoey but usually is a good place to keep warm and there is plenty of room. The idea was influenced by the fan village at Parc y Scarlets, and the club are experimenting with different bands and types of food to try and strike the right balance. Players and coaches regularly drop in for Q&A sessions before and after the game too. 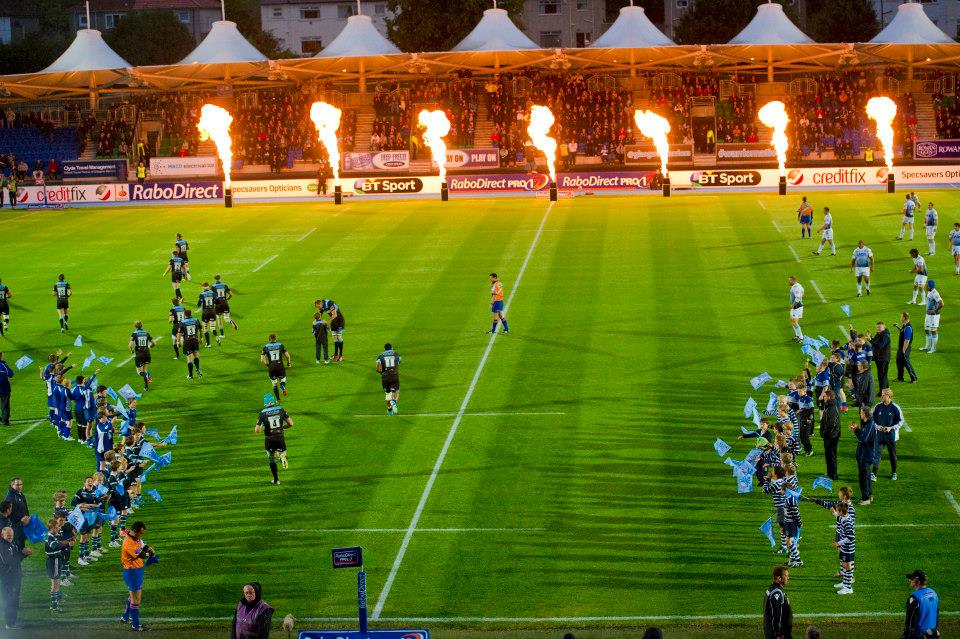 Parking is not available at the stadium, so leaving the car at home is recommended. The area surrounding the stadium is residential, and a permit-only system is strictly enforced on match nights. If you're lucky though, free parking is available on the South side of Dumbarton Road and on some side streets, with a 5-10 minute walk to the ground from there.

Wasps fan Trevor Wilson has offered some useful information on a park and ride scheme for those driving from the South. Upon leaving the M74 at Junction 1, follow signs for the Shields Road Park and Ride which you will come across shortly after exiting the motorway. The Park and Ride is beside an underground station, and for £5 you can park all day and they even throw in one return subway ticket so you can avoid the traffic and hassle of finding a parking space in town - you can book in advance here.

You can also take a cab from the City Centre, and if there are enough of you to fill one it will probably more out cheaper than the train. There are cab ranks at Central station, Queen Street station, Hillhead subway or you can usually flag a black cab down pretty easily.

The nearest train station is Scotstounhill, about 5-10 minute's walk away. This connects with the two main stations of the city, Central and Queen Street (lower) in around 20 minutes. You may have to change trains at Partick, but as it's usually only a 5-minute stopover don't let this put you off. Jordanhill, Hyndland and Patrick stations are also within walking distance of the ground. National Rail Enquiries can provide more detail.

There are several bus routes that drop off near to the ground. The No 1 / 1A / 1B services run regularly from outside the Radisson Hotel on Argyle Street (SW of Central station). The stop for Scotstoun is just before Harland Street on Dumbarton Road, about a 10 minute journey. From there its a two-minute walk to the stadium which can be seen from the bus stop. Ask the driver for Scotstoun stadium and they will be able to tell you where to get off. You could get a return, or alternatively get a single then head to the bars of Byres Road and Ashton Lane after the game.

Finally, the Number 2 bus (operated by First) leaves from Hope Street outside the NW entrance of Glasgow Central station - alight on Dumbarton Road which is a short walk from the stadium. Thanks to Alex for his input.

There are two airports in Glasgow;

The International Airport is by far the closest of the two, located around 10km West of the City Centre. A wide range of airlines operate into the airport, including Easyjet (to Belfast, Bristol, London and Paris amongst others), Flybe (to Belfast, Birmingham, Cardiff, Exeter, Manchester, East Midlands, Paris, Southampton), Aer Lingus (to Cork and Dublin) and British Airways (to London).

Regular bus services run from the Airport to the City Centre, with the journey taking around 30 minutes depending on the traffic. Buses leave from just outside the terminal entrance.

Glasgow Prestwick is around 50km to the SW of the City. Nearly all services are operated by Ryanair, including those to Derry, Dublin and Paris (Beauvais). Although it is further out of town, there is a train station at the airport and Glasgow Central is only 45 minutes away by rail.

In addition to the clubhouse mentioned above, there are several other bars in the ground for the thirsty punter.

The majority of Warriors fans go straight to the ground so there aren't any specific meeting points for rugby-goers. Instead, here are a few recommendations for those new to the City; 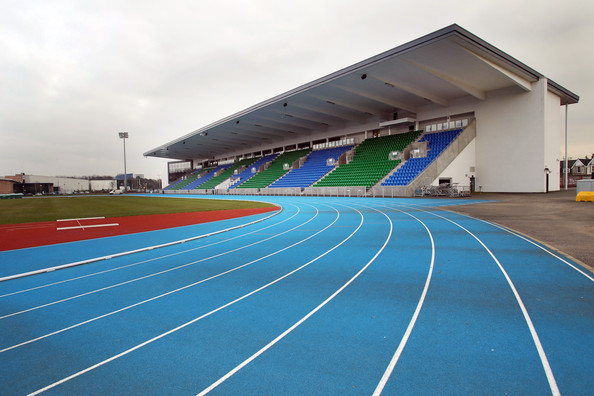 The Main Stand at Scotstoun

There are food outlets within the ground itself - with Veniburgers getting good reviews in these early days at Scotstoun! As is mandatory at Scottish rugby games, you can also get a proper Scotch pie at the ground.

Before / After the Game

Glasgow has a reputation for fine food, and there are plenty of excellent restaurants on offer.

Glasgow is a popular destination for tourists and business travellers alike, so there is no shortage of budget and luxury accommodation. The usual chains (Best Western, Premier Inn, Holiday Inn, Thistle, Malmaison) are mostly situated in the City Centre. For those on a tight budget, the Easyhotel in town can be as little as £25 a night, if you can handle having no windows!

Glasgow can sometimes get a bit of a bad rap, particularly South of the border, and we have absolutely no idea why. There is plenty to see and do here, and lots going on in the build-up to the city hosting the 2014 Commonwealth Games, if the bars and restaurants aren't enough to keep you entertained.


Off the Beaten Path

Glasgow is a great gateway to much of what Scotland has to offer.

And Then There Were Two...