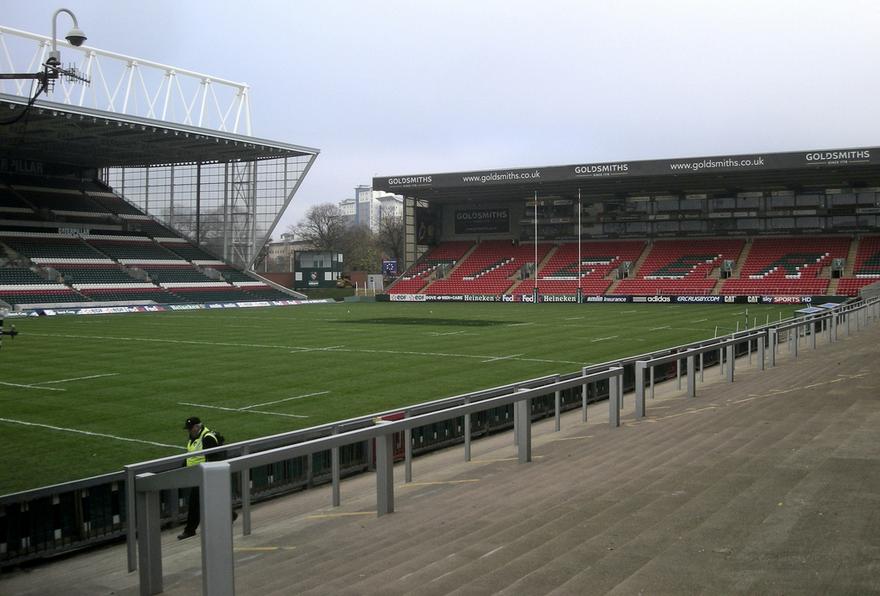 Leicester Tigers (originally known as Leicester Football Club) were formed in 1880 and adopted their famous scarlet, green and white hoops fifteen years later. The club have been based at Welford Road since 1892 which today holds the title of the largest purpose-built club rugby stadium in England.

Leicester's trophy cabinet must be overflowing - they have a long list of victories stretching back to 1898 when the Midlands Counties Cup was won with victory over Moseley. The first victory at a Twickenham final came when Tigers won the John Player Cup in 1979, again defeating fellow midlanders Moseley. They went on to retain this trophy for the following two seasons with victories over London Irish and Gosforth. When league rugby was introduced in 1988 Leicester were the inaugural winners, and as of today they have ten English premiership titles to their name, the last coming in 2013 when the Tigers defeated Northampton Saints at Twickenham.

Welford Road has hosted rugby matches since 1892, and even hosted international rugby as early as 1902 when England defeated Ireland 6-3. The first game at the ground under lights was played in 1964 and the old ground has been continually developed and expanded over the years into one of the world's greatest club rugby grounds, and not just in terms of size. The atmosphere on a big match day at Welford Road is hard to beat, with the passionate fans kept close to the action and well-oiled from the many bars inside! 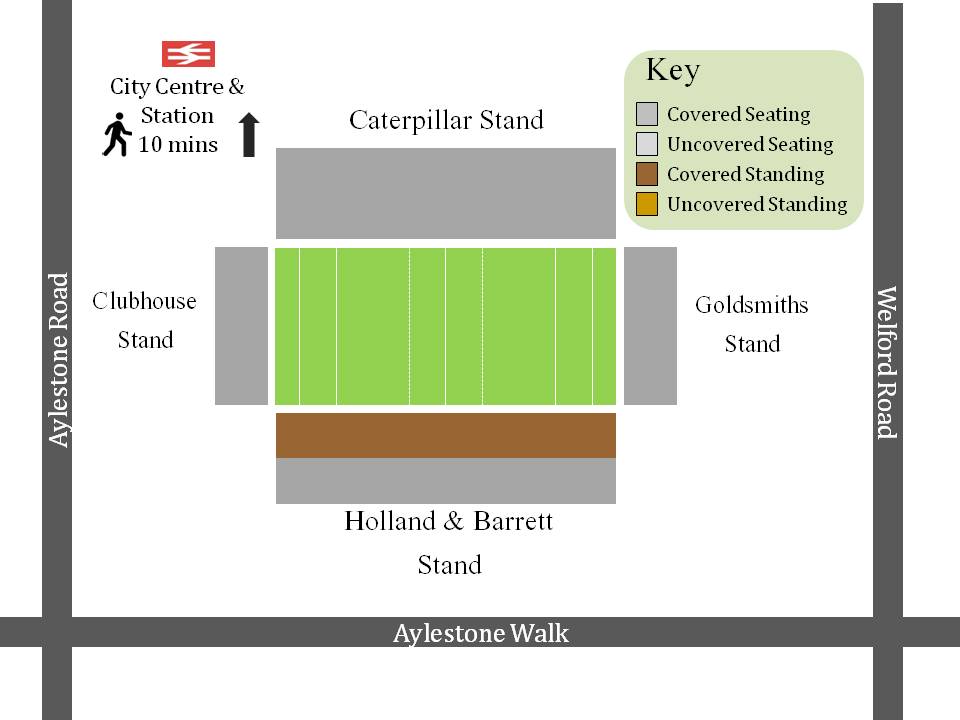 The most prominent addition to the ground in recent times is the all-seater Caterpillar stand that towers over the pitch along the touchline. Opened in 2009, this stand alone can hold 10,000 supporters. Opposite the Caterpillar stand on the South side of the ground is the Holland & Barrett Stand, with seated areas and a large terrace along the front that gets pretty rowdy on matchdays. If the game is a sellout though you're recommended to get to the terrace early as it fills up and is not the easiest to find a space in.

To the East behind the posts lies the Goldsmiths stand, an all-seater structure. To the West lies the newest addition to Welford Road and is full of all sorts of things in the manner of all new stands. You'll find just over 3,000 seats for watching the match in addition to the ticket office, lounges, shops and a concourse area.

Whilst the proximity to the M1 motorway means getting to Leicester by car is easy, as in most UK cities parking isn't the easiest. Here are a few options for those who can't leave the car behind.

Probably the easiest way to travel if you can - Leicester's newly revamped train station is no more than 15 minutes by foot from Welford Road. Upon leaving the station, cross the road, turn left onto Waterloo Way and continue until you see the ground! Regular services run to Birmingham New Street (where connections to most destination can be made), Sheffield, Nottingham, Cambridge, York and London.

The closest airport to Leicester is East Midlands, approximately 19 miles to the North. Popular with budget airlines FlyBe and Ryanair, scheduled flights operate to many destinations in the UK and Europe. Regular 'Skylink' buses operates from the airport to St Margaret's station in Leicester 24 hours a day, with the transfer taking around 1 hour.

Birmingham Airport is only 37 miles away, and is also easily connected to Leicester. Jump on a short train service to Birmingham New Street, where connections can be made for services to Leicester. Total journey time approximately 90 minutes.

London Stansted Airport is also connected by rail to Leicester, with hourly direct services operating but they do take around 150 minutes. 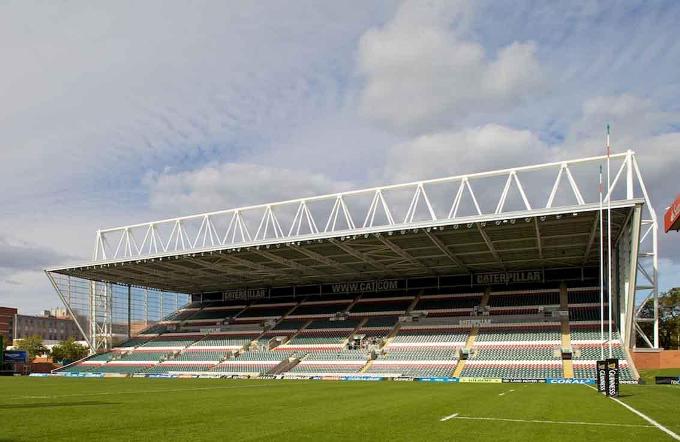 As a dedicated rugby ground, the overseers at Welford Road have wisely provided plenty of options for the thirsty punter. The substantial 'Final Whistle' bar located on the ground floor of the Caterpillar stand is open before, during and after matches. There are also two bars in the underbelly of the Holland & Barrett stand.

As both a student and a rugby city, there are no shortage of options for grabbing a drink in Leicester. 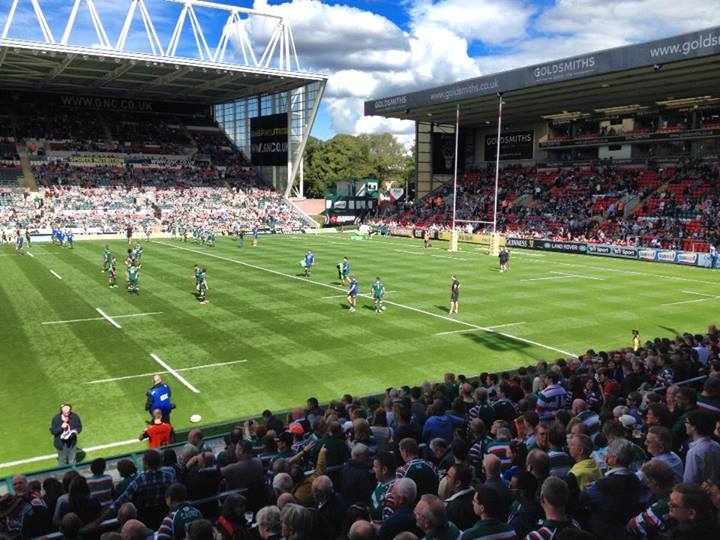 View from the Terrace (Holland and Barrett Stand)

There are catering facilities inside Welford Road as you would expect, but Leicester is famous for its curryhouses which are ideal for a post-match feed. Here are a few recommendations;

For those who don't fancy a curry, there are plenty of other options in Leicester. 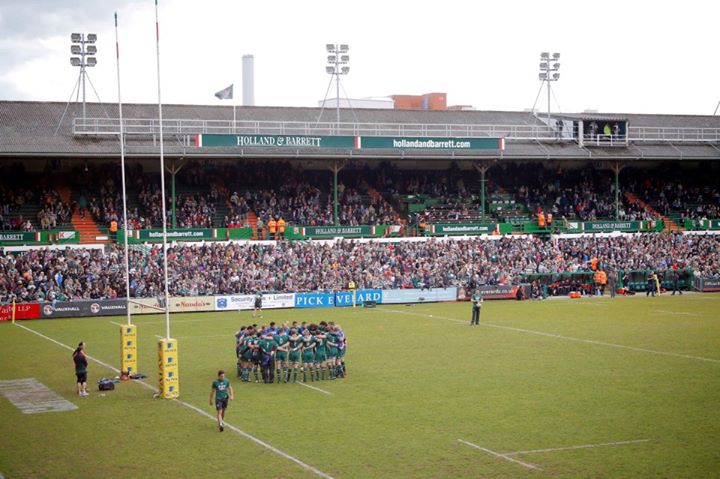 The Holland & Barrett Stand, with a Packed Terrace at the Front!

Leicester isn't particularly on England's tourist trail, but there are a few things to see and do for those who have had their fill of beer and curry;