The Ospreys were founded in 2003 when Welsh rugby adopted a regional structure, as one of five teams (now only four) created to represent the country in the Celtic League (now Pro12), Anglo-Welsh Cup and European competitions. The Ospreys cover an area in South Wales that includes some of the most famous names in Welsh club rugby - Swansea, Neath, Aberavon, Maesteg and Bridgend, who all still compete in the Welsh national leagues.

What is sometimes missed by those who don't fully understand the intricacies of Welsh rugby is that the Ospreys are the top tier of professional rugby in the entire region, and that the clubs (such as those above) still exist in their own right. Wales' second city Swansea is home to the Ospreys, where the team groundshare with football side Swansea City at the Liberty Stadium. The team headquarters and training facilities are based at Llandarcy in Neath.

Following two seasons ground-sharing at the home grounds of Swansea RFC and Neath RFC, the Ospreys moved to the Liberty Stadium in time for the 2005-06 season. The stadium is located in the northern suburb of Landore, around 2 miles from the city centre and adjacent to a retail park. Whilst the Liberty is usually only around half-full for rugby matches, the Ospreys have had a sell-out for several fixtures including the famous 24-16 win over a touring Australia side in 2006.

The stadium has two tiers on all sides, with the West and East stands running the length of the pitch, and the North and South stands behind the posts. Only the East Stand and southern corner of the West stand typically used for Ospreys matches. All seats are covered from the elements.

Take Junction 45 off the M4 and follow signs for the A4607 towards the City Centre, then follow the signs for the stadium. There is no parking at the stadium, but the club sometimes operate a park-and-ride system from Swansea Vale, signposted from the A4067. Parking in the immediate area around the stadium is to generally be avoided, as there are permit systems in place and you are likely to end up with a ticket.

Swansea station is located in the City Centre, just under 2 miles from the stadium. Regular services operate from destinations including London Paddington (3 hours) via Reading (2.5 hours), Bristol Parkway (1.5 hours) and Cardiff (1 hour). Slow services operate from Manchester in 4 and a half hours, calling at Stockport, Crewe, Shrewsbury, Abergavenny, Newport and Bridgend amongst others. Services to connecting destinations can be found on the National Rail Enquiries website.

To get to the Liberty Stadium from the station, you can walk in around 30 minutes, or take a local bus service.

Cardiff International Airport is 43 miles from Swansea, where scheduled flights operate to destinations including Dublin, Newcastle, Belfast, Edinburgh, Glasgow, Paris and Amsterdam. A bus service operates from the airport to Cardiff (Rhoose) Airport train station, where you can catch a train to Swansea, although you will have to change at Bridgend. Total transfer time is around 2 hours. 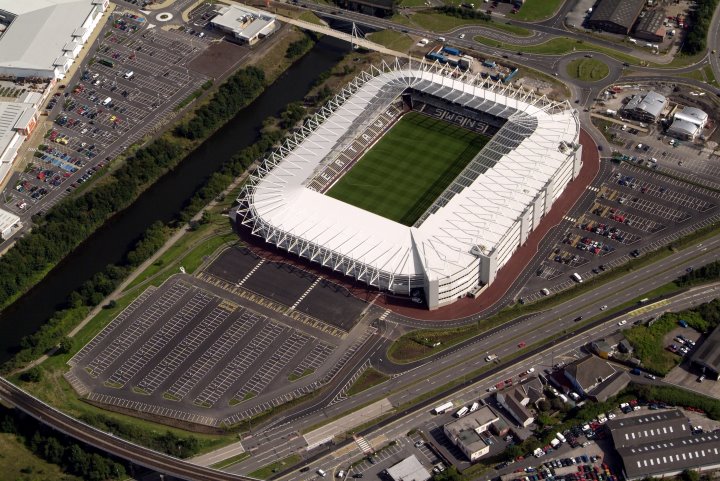 The Liberty Stadium has a supporters village bar, where there is also often pre-match entertainment provided. If you're still thirsty after the match ends, head to the Riverside lounge behind the East Stand.

You'll find plenty of places to quench your thirst around Wind Street in Swansea, a 20-30 minute walk or short hop in a taxi from the Liberty, whilst there are also many pubs opposite the ground under the railway arches and along Neath Road.

We've received recommendations for The Station, The Coopers, The Commercial, the Alma and the Railway. Take your pick and let us know what you think! 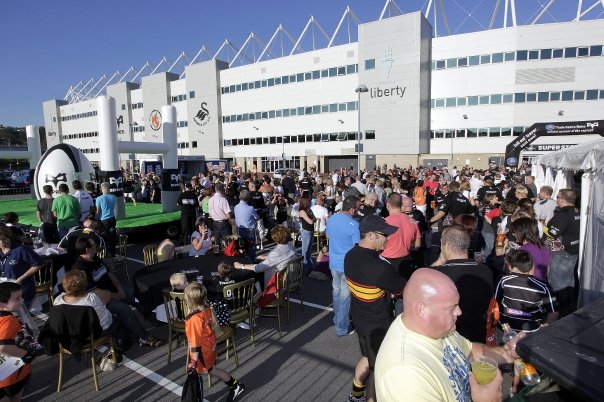 The Supporters Village at the Liberty

Next door to the Liberty is a Harvester pub and a Frankie and Benny's restaurant. On the other side of Neath Road there are several more restaurants including an Italian, an Indian and a fish and chip shop.

Where's best to eat in Swansea? Where can you get a half-time feed at the Liberty Stadium?

Help fill out this section!

If you're staying over in Swansea, you are probably best to stay in the City Centre rather than close to the Liberty, where there isn't a lot to see and do aside from the stadium.

Although the rural areas around Swansea are popular with tourists, there is plenty to see and do when you are in town. Wikitravel provides a pretty comprehensive list.

Off the Beaten Path

Swansea is situated on the Gower Peninsula, and a ten minutes drive from town will take you to an area of Outstanding Natural Beauty known for it's beautiful coastlines, beaches, woodlands and numerous sites of historical interest. If you are without a vehicle, buses operate to the villages from the Quadrant Bus station in Swansea.

Trophies in the Cabinet